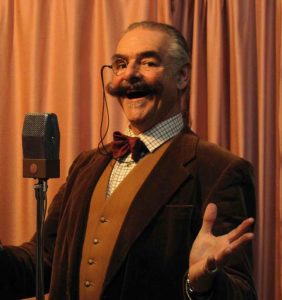 Jonathon Coudrille was trained as a painter, but started his career as a political satirist, song writer, and performer.

His paintings have strong associations with Surrealism as he studied with John Tunnard and the late Conroy Maddox was a personal friend. Although early works are often signed J.X.Coudrille or JXC, they are usually identified via the artist’s monogram. At the age of 18 he sold a painting to the Bank of Nova Scotia, and bought a Rolls Royce with the proceeds. His first solo exhibition was at the inaugural Harrogate Festival, and he has exhibited at the Royal Academy and the South West Academy. He has also been exhibited as a guest artist of the Stuckists. In 2004, his work was included in The Stuckists Punk Victorian show at the Walker Art Gallery during the Liverpool Biennial.

Coudrille’s books include the remarkable Psychographic Alphabet book: “A Beastly Collection” published by Frederick Warne in 1974. This extraordinary book was widely praised by critics. Indeed, it could be said to be the first truly Surreal children’s book. Copies are now much sought after as collector’s items. It was, and still is, a work of genius – a tour de force.

“A Beastly Collection” was soon followed by a number of colourful and enthusiastically received children’s books for the innovative G. Whizzard imprint, including the best selling “Farmer Fisher” (G.Whizzard, imprint of Andre Deutsch). This was the first picture book on the British market to incorporate a record. Coudrille wrote, produced, sang and played most of the instruments on this record and was chosen as 1976 Children’s Book Of The Year. Farmer Fisher has been republished in 2010 by Footsteps Press. 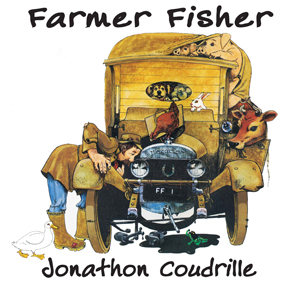 Read more
Amazon review
One of many 5 star reviews
"Had this when the kids were small way back in the late 70's early 80's and have been looking for a long time to find it again. One of the best and most fun books for young children and the young at heart. The original came with a tape of the song, now you have to download it but that no doubt makes it cheaper. Highly recommended I am certain no one could ever regret its' purchase."

And in the back were
Sows, Cows
The farmyard Cats,
Hogs, Dogs
The farmyard rats,
Hares, Mares
A pound of pears,
Billy goats in hairy coats,
And a horse (of course) and a ton of turnips
On the way to market.

The fabulous artwork is also by Jonathon Coudrille 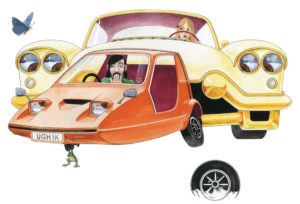 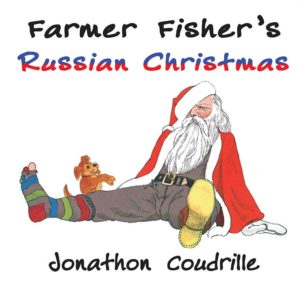 Read more
Goordreads review
One of many 5 star reviews
What a beautifully written and illustrated book. Farmer Fisher's Russian Christmas was a captivating and magic read for myself and my little sister. She loved it to bits, the pigs adventure was a fun one to watch unfold. High recommend to all.

Farmer Fisher gets an invitation
Reads it with a twinkle in his eye…
‘Christmas won’t be meagre –
There’s a boat tonight!
Cousin Igor says we’ll catch it if we try! 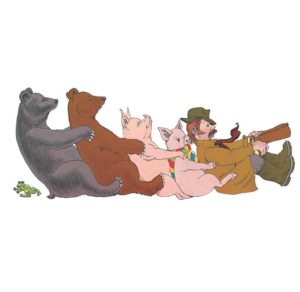 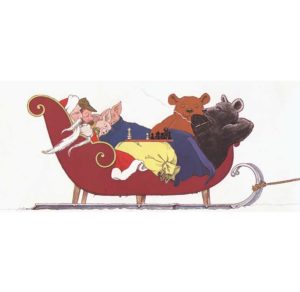