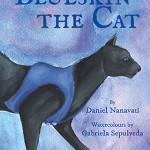 Blueskin enjoyed being a highwayman. He found being reincarnated as a cat terrifying. But when he sees the two brothers responsible for this transformation, he decides to plot his revenge. So begins his adventure as a cat on the High Seas, avoiding grumpy sailors, fighting pirates and surviving a storm, until they all finally arrive in America. There he learns the true nature of being a cat and how much better it is than being a highwayman.