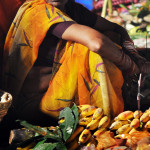 During the 1950s Shänne Sands lived between England and India.

This evocative, beautifully written prose work by the poet, brings gods to life, populates streets with breath and takes you into the world of many religions wandering their path on unsteady legs through the vibrant seasons and the reasons people give for living.

Bombay is a hot, sensual city, where everything and everyone moves in time to the swaying palm trees. Endless crowds drift through the hot, dusty streets from dawn till sudden darkness for no twilight softens the abrupt ending to an eastern day. A huge burning sun’s heat breaks across their backs warming at the same moment dozens of mangy cats, millions of over-fed, overnoisy crows, green parrots, tiny sparrows that seem strangely out of place in an eastern city. Untold variety of tropical birds adorned in lovely exotic feathers and packs of hungry, unloved dogs even more mangy and rabid than the cats.

Insects that outnumber all other living creatures fly or creep or bite or sting. Buzz and hum over pavements, along marble floors, up and down walls, drift on silky threads across ceilings and dangle from big, black electric fans that look like monsters all twisted with cobwebs as they twirl out warm, windy air from spicy smelling rooms.

With the inevitable sacred cows pushing for their honoured place along the roadside near a not so holy buffalo cart. Stray chickens enjoy a brief escape from a wicker basket left unattended for a moment in a back street bazaar. They pick at sacred droppings while squirrels with a touch of England about them, run up and down the trees keeping time to the rather mournful sound of bleating goats, whose tormentors, flies and ants are everywhere. Fair Bay or Great Mother, Maha Amma is known the world over as Bombay. Like most Indian cities she is a difficult Great Mother, churning the emotions. Quick to anger, quick to love, quick to tears, even quicker for the dying. Saris twirl past the old, narrow streets. Streets alive with cockroaches and huge black rats that procreate themselves almost as fast as the swarming flies around the heaps of stale dung, left in odd corners.

High in the trees the bright green parrots cackle a kind of tormented song. The sun with its cruel power, becomes a dictator burning the body and each day except for the monsoon weather is a copy of the day before. Hot. Flame hot. Hot. Flame hot. Until the sun leaves the sky falling abruptly into an overheated sea.

Millions of insects humming and ugly bite into the warm flesh as you sleep. You become a sun-drenched idiot always damp with sweat. Unable to forget the heat you play with the air conditioner’s switches and drink like a bibacious fool, cursing the tropical city, where heat and dirt and too much humanity separate you from any kind of charity towards the poverty.

One beggar becomes the same as another beggar. One hungry child just another poor Indian to look at taking your pick from millions, feel hopeless about their lives, shudder at the sores and filth, curse the state of undeveloped, backward countries and then pass on and yet again on, leaving perhaps a few small coins of little value in a brown, soiled palm. The poverty-stricken, dark-skinned ones cannot escape from the wheel of incarnations, cannot go back far into ages lost and forgotten. Back into the security of the ancient forests they left in other lives so long ago.

Back to the warmth of their sacred fires to dance their dance of existence before Lord Krishna and ask to be lifted from the gutters. To raise their beautiful eyes to a hopeful sky. Not to be poor and desireless with Hindu pessimism, but to be filled with certain desires. A certain joy that life was meant to be a richer experience than to beg at the foot of another Indian who simply places a beggar’s fate in the lap of one of a thousand gods or one of a thousand Castes.

But I will try to wake the gods up. Shout their names for sound is pleasing to them. I will ring my bells till their ears ache. I will cry to Siva the great god who is Lord and Master of asceticism, who wears the Brahman cord and whose forehead is often marked by three horizontal stripes with a third eye staring from its centre. I will cry to him to come with me. Also to Parvati the daughter of the Himalayas and Siva’s gracious, brilliant, but sometimes inaccessible goddess wife. A feminine divinity of Hindu power. I will cry to Brahma to turn from stone. He who is the creative god, the father of all gods and men, shall leap from his temple and Vishnu asleep on the snake Ananta Sesha will wake, arise before dawn, wash their feet and come through the streets. To see the sleeping poor and the fresh born walking to a day of nothingness. To listen and hear the Cries of India coming down the centuries, touching Buddha’s mouth at the corners as he smiles softly at all these people waking to the chant of an old, bent beggar man.

Forgetting for a second the large important houses that glitter white against the blue sky. Forgetting the busy offices and opulent apartment blocks that tower above the heads of the poor. Forgetting that poverty is a supposed natural law hardly cared about or maybe not even noticed by most Indians and foreigners, who accept suffering, because India is such a ‘poor country’, left desolate by too many invaders. Forgetting all the words and schemes and lost ideals. Dead political giants and glorious Hindu saints. Forgetting even the corrupt grain merchants and dreaded money lenders from the Bania caste who come from desert cities in Rajasthan to become successful merchants in Bombay. All hiding behind the backs of obese, white trousered black marketeers!

Forget for a moment you lazy gods this city of commerce, wealth and honour; this city of history and horror and come with me through the streets of Old Mumbai. Gods smother your demons. Eat them up and walk along the roadside to where a patch of red soil throws up bright scarlet gladioli as red as chilli-pepper. As red as the blood of the hungry, as red as their anger. Do not be misled by the soft look in the dark brown eyes. The poor are angry, hungry and dying.

Come gods everyone loves Bombay and calls her with affection ‘Old Mumbai’. Again and again they return to wander through the heartless city. For though the Great Mother never refuses sanctuary to any of the endless thousands of bare feet that tread her hot pavements, she is a harsh mistress for those who have no money. I will cry to the gods to look high into the Banyan trees. No rupees grow there for the poor to gather from sheltering branches. Only half-ripened figs are their harvest. They curl up underneath these thick, spreading trees and sleep the sleep of those who have little to be active for and perhaps they dream or lie listless in groups, wondering where they can go when the monsoon breaks upon their ragged bodies.

It was an old 17th-century proverb, a time in her history when the Great Mother was still only a wilderness of malarious mud-flats and dense coconut plantations, that ‘two monsoons’ are the life of a man. Even today a beggar child can be oddly blessed to see one monsoon. But it is not yet time for the rainy season of Varsha. The rains have not wetted the red earth. The streets are hot. Bombay is alive with a living mass of people. A tropical roundabout. An ancient civilisation making a human coloured dragon of Castes and creeds and races moving like a never ending television spectacular across the city. While the Arabian sea laps at its edges like a thirsty puppy, maybe waiting to take back the land that was reclaimed from its muddy swamps long ago!