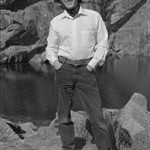 Daniel Benshana graduated from Balliol College with an honours degree in Theology and Philosophy.

He chose to write for children and then for adults having two agents in the course of eight years. In 2010, with Calvin Innes, he self-published an essay A Brief History of Lies being an essay on the habits and genetics of lying and a run through of twenty five years of research on the subject. Considered by psychcentral as a useful introduction to the subject it was used by a research team as part of their reading to publish a paper on lying on the Internet.

Having been involved in the evolving world of digital publishing he started work with the artists and professionals with whom he had worked on fundraising projects for some fifteen years both in the arts and for environmental causes.

Footsteps Press is a child of the digital age with its origins embedded in the traditions of fine art design, typographical excellence and bringing worthwhile work to audiences who would not have access to it through the large publishing houses.

Daniel Nanavati has published A Brief History of Lies in 2010 (kindle edition 2015), The Exalted Gate  with Annie Ovenden, Blueskin the Cat and Little Wolf with Gabriela Sepulveda, Midrak Earthshaker with John-Thomas Pryor,  Ruzniel with Jennika Bastian and Mr Binks with Nia Ellis.

He is currently working on publishing a series of children s poems and Mojolo and Sanjava,  a sequel to Ruzniel.