Fidelity is for Swans 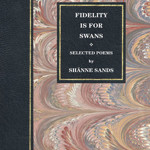 “… the voice of Dickinson but better, and also the loaded details of a T.S. Eliot. (Shänne Sands) is here and now in her poetry, and her imagery and diction resonate like lightning throughout the senses. (she) is a master of tone and as gritty as sand as the words awaken the dullness of our senses and make us feel the world about us, its sadness, its joys, death and life.”

You Are Not The River

You are not the river
I am not the mountain
We are flesh, we are blood.

You are not the universe
I am not the infinite
We are life, we are death –

You are not the rain
I am not the ocean
We are skin, we are bone.

I take your flesh
You taste my blood
Our bones and skin
Our life and death touch.

Then an ocean fills with rain –
Infinite is the river
And a mountain grows from us.

A young child in World War Two she spent the war in Cornwall where she says, she found her soul wandering the cliff tops and beaches of Porthtowan on the north coast. The war which shaped so many destinies took from history a million and half European Jewish children, a fact that the emerging artist in Shänne Sands understood very well.

As a teenager she studied at the Guildhall School of Music and Drama falling deeply in love with fellow student Alan Martin, a love that broke when she was nineteen and hurled her life into the turmoil from which she emerged with two children born of Indian fathers, a body of early work including Grass, started when she was seventeen and finished when was eighteen. A remarkable poem for one so young. Having been the love of a brilliant British spy and a lonely Indian King.

To read Shänne Sands is at once to touch the wistful, the sad and yet to be uplifted. Like Balaam in the Book of Numbers she knows what life is all about, she knows the suffering and the struggle, but called upon to speak she praises for in the praise is the hope, the desire and the longing that humanity realises we can stop inflicting the pain if we want to, we just have to leave behind our willingness to be led, our readiness to see the alien in our neighbours, our eagerness to see ourselves as better than anyone else and our fear of sorrow.