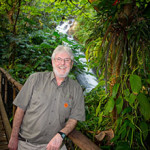 Jonathan Ball OBE (jonathan-ball.com) is the co-founder of the internationally acclaimed Eden Project. He was awarded his OBE for services to architecture.

I have been an enthusiastic conference and after dinner speaker since my student days, but my early Eden experiences have put me in demand to talk about the project, and the process of its creation. After my journey through the Royal Courts of Justice I have, by necessity, become knowledgeable in the area of intellectual property protection and the safeguarding of creative ideas. This hard won experience has resulted in many requests from audiences wanting to know how a citizen from a small town in Cornwall survives such a demanding assault to well being.

Jonathan published The Other Side of Eden in 2014 and a memoir of his formative years in Bude, Cornwall, UK,  ‘The Winds Call No Man Sir’ in 2015.