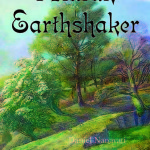 Hidden in the centre of the Earth stands the Tree of life, each fruit of which holds a life of something in the universe. But a deadly enemy is digging its way towards the Tree and the only people who know and can stop him are two magicians, three elves, two children, a Ruzniel and the mysterious people who guard the Tree.
But they will not be enough to defeat this enemy. They will need more than magic. They will need determination, fearlessness and a lot of luck.