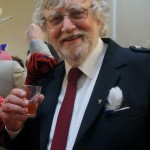 Philip Hosken was born in Cornwall and educated at Truro School. He travelled a great deal in life to develop a number of companies and retired to Cornwall where he launched Cornish World magazine and edited it for six years. This was followed by his leadership of the project to build a replica of Richard Trevithick’s 1801 road locomotive and an interest in the inventor’s obscurity.

In 2011 he wrote The Oblivion of Trevithick, a weighty, original research into the lives of Trevithick and those around him. In that he revealed the deception that beleaguered the naïve genius and here, in Genius, Richard Trevithick’s Steam Engines
he publishes the salient facts of the case.

Philip lives in Cornwall where he is a bard of the Cornish Gorsedd who has travelled throughout the Cornish Diaspora. He is the chairman of the Trevithick Society and father to Treve, Tamsyn and Lowenna.