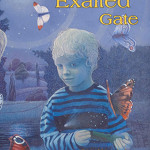 Ten traditional fairy tales with just a touch of the modern in them, inspired by the beautiful and inventive paintings of Annie Ovenden. Follow the adventures of the actress Judith who hates shoes and her magical, unwanted boots; listen to the wise dog Kai in ancient Japan; find out if Lonia will ever get married and what made Densus turn blue; witness a dragon?s last hours; discover what made Alice?s granddaughter angry and how Ned saved his home. Can the elf Opikle Dinn save Rebecca?s life? What can a ghost do to save Dinhama?s village in ancient India? What happened when Keith learned his dog could talk?

Judith hated her shoes. In fact most of the time, Judith hated all shoes. She loved to feel the fresh grass in between her toes. She loved to feel the sand beneath her feet. She loved to paddle barefoot in the sea and admire her newly painted toenails in the sunshine.
She liked walking on carpets without slippers, she liked putting powder on her freshly washed feet and scented oil on her ankles. She would put henna tattoos on the bridge of her feet, and wiggle her toes at her cat. She just hated shoes.

High heel shoes, one inch heels
sandals, stilettos
flat shoes, chappals
work shoes, hobnail boots
soft shoes, clogs
kickers, court shoes
trainers, wide fitting
knee high boots, riding boots
and slippers.
She hated them all. Which was a real problem because she had to wear them. Just as we all do.
She had to wear shoes to the supermarket, in the car, to work, whenever she went out to visit her mother or went out on a date. Every road, pavement and most of her friends required she wear shoes. Shoes were just everywhere! She even had to wear them when she went to drama school but she was able to take them off when she rehearsed on stage.