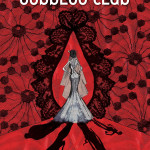 When you commit murder, you kill the best part of yourself. Emily Alice Ovenden slices into the psyche of the modern woman in this unflinching account of revenge.

The Goddess Club is an account of how a group of women come together, plot, conspire and act without due respect for the consequences of their actions. Ovenden, author of The Ice Room, continues to explore the relationship between the waking world and the unexplained in her second novel which gives a chilling account of obsession, betrayal and modern day witchcraft.

Author of The Ice Room this is Ovenden’s second novel.

They never found him. That minor detail perplexed
me for a long time. I returned to the banks of the
canal some years later and retraced my steps. The
ground was wet with the endless autumnal rain; the
red soil, thick and sticky as congealed blood, seemed
curiously apposite as it clung to my suede boots. I
should not have been there; every detective novel I
have ever read has told me the perpetrator should
never revisit the scene of the crime but I wanted to
see for myself that he was truly gone. I walked up the
towpath, the gravel crunching beneath my feet as it
had done on the night that we killed him.
I found the location, the bench still there with
its mess of graffiti no longer vivid in metallic spray
paint but faded and translucent. The splintering slats
somehow still bore the imprint of the two struggling
lovers, their forms a juxtaposition that was halfway
between rapture and rape. The tangled bushes,
hawthorn and sloe, were creeping forward now but
they remained some way behind the place where the
killing had happened. They were older and stringier,
bare of their leaves and oddly clumped together
making asymmetrical windows where they had
once been thick and a place for hiding. The oak was
dead. It had been cut down and now only a smarting
stump remained where it had stood, the deep, fatal
wound, fresh and still brightly orange.
I remained at the water’s edge, staring into the
green, soupy water, searching for his pale, lifeless
VII
face but it was not there amongst the weeds. I dug
the tip of my umbrella into the shallow water,
expecting some ghoulish hand to grab it, but only
a mushroom-shaped cloud of fine mud rose to greet
its point. It was as if it had never happened but I
remember that it did and therefore that memory
must be real for I have never been a liar, neither to
any other nor myself.
‘Surely you must know that I love you,’ he had
said just before he had died and at the time I was the
only one who believed him. I knew amid my anger
and jealousy that he was speaking the truth but she
heard his words as a shameful lie that would peal in
her ears until it drove her to madness.
I would like to be able to say that I hardly think
about it any more and that it has slipped into the
black tunnel that is my past but that would be a lie.
I cannot control my memory nor can I edit it to suit
my peace of mind and although it haunts me daily I
have never been sorry. I have never felt a moment of
regret. He deserved to die; he deserved every bit of
the pain we inflicted upon him.
As I stood gazing into the water at the canal’s
edge, my umbrella still penetrating the surface and
marking its steady flow, I knew instinctively that he
would never be found; I knew for certain that we
were safe from any repercussion but there in the
water, for a moment, I saw her face once more, her
beautiful inimitable face, and I remembered.