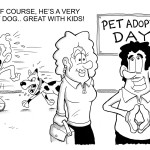 He has illustrated over twenty books, worked on advertising for the Smurfs movie, Slush Puppies and has worked on everything from books and comics, to toys and video games. His quirky and humorous illustrations have gained him fans worldwide.

He writes and illustrates books for children of all ages, with a focus on spooky, scary, macabre and humorous stories. Described as “One of the best in the busines” by the Sheffield Star Newspaper, Calvin has been featured in numerous newspapers, magazines and on ITVs Daybreak program talking about his work as an author and illustrator. He regularly teaches children (aged 4-14) around the UK drawing skills and gives advice on creative writing.[/vc_column_text][/vc_column][/vc_row]